This is Part 2 of a 5-week wildflower spirit journey my husband and I went on in December 2016. Part 1 tells the story of our journey through NSW, from Sydney through the Blue Mountains, and then down the coast to Eden and Merimbula. Part 2 continues the journey, taking us into and through Victoria, from the beaches of Mallacoota to the alpine flowers on Mount Hotham, then down out of the mountains and back to family. 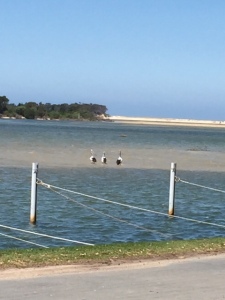 After we crossed the border into Victoria, we drove to Mallacoota and Gypsy Point. I kept feeling disappointed because we were driving through incredible forests, past enticing wildflowers that whipped past in a blur, without stopping. When we finally arrived at our destination and got out of the car, it was in an inhabited area filled with people and buildings and pretty gardens and more ocean: not at all the wild and untouched oasis I’d hoped for. And yet, in spite of that, Mallacoota was a beach that did actually hold some appeal for me, because it was riddled with small sandy islands covered in vegetation and I could imagine exploring them in a kayak. The pelicans helped; like ducks they always seem as though they are smiling, and I could happily watch them for hours.

I had a truly surreal moment while driving through the forest on our way to Gypsy Point, an almost meditative shift of consciousness in which it seemed as though the forest itself was singing to me. It only lasted a moment, but it was enough to make me feel as though the Victorian forest was welcoming me and casting an enchantment over me. My husband felt that the trees and mountains and valleys were bigger and more majestic after we crossed the border, so perhaps the spell caught him up in its web as well.

We left Gypsy Point behind us, finally heading inland. Stopping on the side of the road to stretch our legs, my husband found a large branch on the ground and began fashioning me a staff to play with while I headed into the forest in search of flowers. Stephen loves making staffs and I love dancing with them: a match made in heaven! Many years ago, my spirit guides gave me an invisible, imaginary staff and taught me how to twirl it around me to clear my space. It feels good to embody the wisdom with a real staff.

I found a beautiful fan flower in the forest, also known as a hand flower. If you are familiar with my Wildflower Spirit Journey book, or you have a card deck, you can see the similarity to the Moth Fan Flower. When I tuned in, this flower encouraged me to stretch out of my comfort zones, and to stretch physically. I felt as though she were helping me to create more space in my joints! She asked me to place the fingers of one hand on my belly, and the fingers of my other hand on my upper forehead. Tune in, turn inwards, she whispered. I felt my aura centre itself and then spread outwards, as though it were relaxing. This flower spirit teaches us how to reach out, expand and open up without losing our centre, or our sense of self.

After a good stretch we got back in the car and headed for Buchan, where we had another property to check out, but the day was getting late so we searched in our camping book for a camp ground and found one called Stonehenge. Stonehenge turned out to be a farm in a valley, with two up-ended Combi vans and a Holden Kingswood station wagon balanced on top to create a Stonehenge shape. The cars were busted up and graffitied hippy-style, positioned on a green hill amongst some trees, surrounded by sheep looking for shade.

Buchan, on the road into Stonehenge

We camped under some old oaks trees and the next morning went in search of the Buchan property, loving the mountain path that wound its way through the forest. Spotting some flowers along the way, I asked Stephen to stop the car and was amazed to find what looked like everlasting or ‘paper’ daisies, an old friend from my childhood. I’m sure it wasn’t exactly the same species I grew up with in central Australia, but it was related nonetheless, and it felt like a bridge in my heart, connecting this mountain forest in Victoria with the red centre.

The Buchan property was gorgeous, scattered with food plants hidden in amongst the weeds and the natives, with 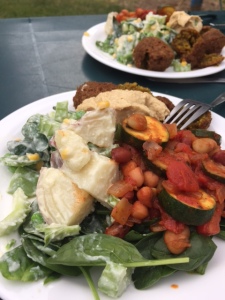 a view of distant mountain tops. When it became too hot to explore any further, we set off for our next camping site, heading up into the Great Dividing Range. It was sad to see so much cleared farming land, like a scar on the surface of the earth. Whenever I see green rolling hills I can’t help but mourn the diversity of plant and animal life that must have once inhabited the now sterile space. Our camping site in Omeo had some trees at least! I was rapt to find some vegan mayonnaise in their local shop and couldn’t resist making a potato salad that night for dinner. One of the things that surprised me on this journey was how inspired my cooking was, considering the limited resources I had available to me. Minimalism often brings out the best in me, simply because I have to improvise.

The next day we drove through some of the highest mountain regions in Australia. The views were breath-taking and we stopped frequently to breathe them in. The native alpine flowers were so prolific that I could sit down on the ground and discover half a dozen different species within a one metre radius around me. I was in heaven but by the end of the day the winding roads with their steep cliff side drops had taken their toll. When we finally set up camp at Mount Beauty I breathed a sigh of relief and collapsed in a grateful heap with a good book, beside a crystal-clear burbling river. 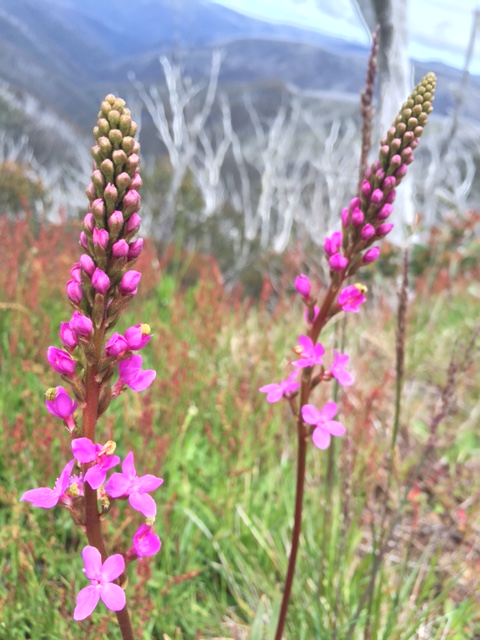 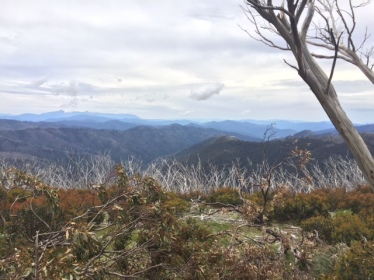 Thankfully the worst of the winding mountain roads were behind us. The next day my husband let me have the wheel as we drove down into the dry, almost desert-like farmlands of north-west Victoria. I wondered how different the land might be if it were still treed, but I did appreciate the long straight roads that led us into Numurkah. We parked outside the local library and while I settled myself in with the microfiche reels, looking through old newspaper records from the early 1950’s, my husband headed for the local pub. I didn’t find anything specific about my grandparents but it was intriguing to get a feel for the fashion and concerns at that time in history.

It was getting late and I really wanted to go to the local tennis courts, so I started packing up when a book in the reference-only section caught my eye. It was a local history book, so I looked up ‘immigrants’ in the index and took a quick photo of the pages listed, but I didn’t have time to read anything. My husband had better luck at the pub, striking up a conversation with a local gentleman who remembered my grandfather. “I was only a boy then, but yes, I remember Vic,” he said with a smile.

“Are the current tennis courts the same ones that were here in the 1950’s?” I asked. It turns out they were. Less than an hour later we were standing on the grass tennis courts, imagining my grandparents meeting and falling in love for the first time. “Granma was living across the road from the courts,” I told my husband while he hugged me and shielded me from the wind. We looked out at the houses across the road, wondering which house had been my Granma’s home during her time in Numurkah.

We camped at the local campground and the next day I drove us into Melbourne, the congested city traffic making it impossible to travel much faster than snail’s pace. Eventually we arrived at my brother’s place, with my mother and sister having arrived the day prior. 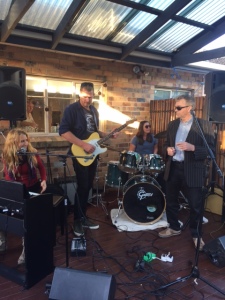 We were all so happy to see each other and later that night my sister and I sang a few songs together. My brother’s birthday party the next day was epic, with family and friends arriving from all over Australia, a live band, lots of jamming. At least three very talented family members played together for the first time, keeping us spellbound! There was a dog who could hold six sticks in his mouth at one time, the best homous you’ve ever tasted, and a lot of very happy children running around, including my brother’s boys.

The following day we had another family gathering as an early Christmas celebration and the day after that we flew to Hobart. While we were settling ourselves into southern Tasmania, my brother and a childhood friend of his travelled with their wives and children on the ferry to Northern Tasmania. They meandered their way slowly down the east coast and eventually met us in Hobart, but not before we had travelled the entire length and most of the breadth of Tasmania ourselves…

…but that is another story!