We arrived at the campsite on dusk and had to work fast to get our beds set up and dinner cooking in the last of the light. We had a play with the GPS but couldn’t work out how to use it. For some reason it wasn’t matching up with what our map was telling us so we decided to leave it behind and stick with our compasses and map.

It was on that first night, in the relative comfort of the carpark campground, that I realised I had made an error in judgement with my bedding. The girls had brought inflatable mattresses with them, and I, in a quest to keep the weight of my pack down, was making do with a pathetic piece of roll up foam. It weighed hardly anything but, like the proverbial princess and the pea, I could feel every rock and stick and clump of grass under me. It was a rough night to say the least, with my neck and shoulder complaining no matter how I lay. But do you think I spoke up about how I was feeling in the morning?

Mind you, I don’t recall anyone asking, says my sulky three-year old self. Nor was there any discussion about establishing this site as the day camp to travel out from and return back to each day. It was as though the cajoling promises made by both of them that morning had never existed. The excitement of the adventure whisked as all up, and as usual, I just went along with what was happening. The ‘nice’ part of me wanted to please them and not ruin their adventure. And the gritty part of me was determined to stick with the original plan in spite of my injury.

After breakfast we packed up camp, restocked our water canisters with water from the nearby river and loaded up our packs. The goal for our first day was to follow the river upstream, turn east along one of its branches, and begin making our ascent towards the escarpment. We wanted to climb just high enough on our first day to get out of crocodile country before setting up camp and we planned to have lunch at a little waterhole nestled alongside the main river on the western bank.

We noticed a few other campers trekking along the east slope of the river and soon realised they were following markers that led into the main area frequented by day-campers. For a while we hiked alongside this path, until a man stopped to talk to us, asking for directions. We pointed the markers out to him and went on our way, but eventually decided to move away from the marked trail. We knew we were probably just being paranoid, but it felt like the man was following us and we felt safer on our own.

I really enjoyed the first few hours on this first day. My neck wasn’t bothering me too much and the river was, for a while at least, mostly sand and rocks: easy to traverse! I found some stunning grevillea bushes and Alex found some goanna tracks in the sand. Using a compass and referring to a contour map was new to me, but I was starting to get my head around it.

We eventually ended up in the centre of the river-bed, on an island of land with water on both sides and thick scrub around us. I felt a bit nervous about crocodiles and suddenly realised I had left Stephen’s crocodile-stick on the roof-rack of Alex’s car. As I foraged around for a replacement, I realised that Stephen’s staff would have been too long and unwieldy for this terrain. So I settled on something shorter, so I didn’t get tangled up while ducking under low lying branches and squeezing through narrow spaces. My new walking stick also helped me test ground before I stepped on it because we were traipsing over uneven surfaces obscured by thick clumpy grass. At times I found myself ankle-deep in boggy mud, with the land threatening to keep me there unless I slipped free of my boots! 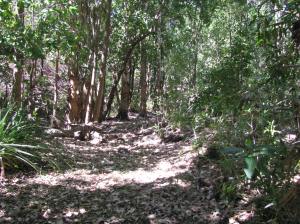 A discussion began, not long into the day, between Kate and Alex: where exactly were we on the map? Had we missed the waterhole? Kate wanted to move back to the left bank so we could count the streams leading into the main river and keep sight of the nearby mountains while matching them to the contour lines on our map. But Alex wanted to explore the right side of the river, charting contour lines along the river’s edge in the hope of finding the waterhole we had a lunch date with. This latter argument won, temporarily.

Hours later, we were no wiser as to our position on the map and the right bank was proving impossible to follow, bringing us smack up against sheer rock-face. After a bit more debate, we decided to head back to the other side of the river in search of higher ground. Kate had spotted a distinctive mound on the map and knew she could establish our position if we could find and climb it. By this stage, we had given up on the waterhole, and were eating on the run.

Making our way over to the opposite bank was easier said than done. We had to back-track quite a long way to find a safe way across the string of tiny islands scattered throughout the river. My frustration gave way to nervous laughter when I ended up knee deep in water, after slipping off a log we were using as a bridge to get from one island to another. It was such a relief when we made our way to the other side without being eaten by a crocodile.

We found the mound Kate was looking for and I climbed wearily, sinking to the ground like a floppy doll and prising off my wet boots with a groaning sigh.

“You’ll need to change your socks and pants”, said Kate, looking up briefly before settling in for another long study of the map, smiling softly with the satisfaction of finally being able to match contours on the map with the real contours around us.

As soon as I was dry again, with my wet socks and pants hanging off my back pack to dry, we set off. Now confident of her bearings, Kate insisted we abandon the river and cut across ground, both to save time and so that she could accurately count the streams feeding into the main river. This is harder to do than you might imagine, because not all of the streams contain running water at all times of the year. You have to rely on gauging the shape of the land and hope that the map you are using is up to date because the land changes over time.

Alex had some fantastic gators on (a kind of shin shield that protects you from snakes), but I had decided against purchasing any myself because I was concerned about chaffing and cost. I figured I had enough to deal with just learning how to carry a pack, and besides, snakes don’t really worry me: you just stomp when you walk through thick grass to let them know you are coming. But the grass we were walking through was chest high, my shoulder was on fire with pain, and stomping was slowing me down. I was starting to feel slightly unhinged, convinced the grass was full of snakes and my shoulder was about to fall off any minute now.

Kate had taken off like a ‘galloping horse’, as Alex later put it, and I quickly lost sight of her in the long grass. I appreciated her enthusiasm and urgency, because we needed to get back on track and find a safe camp before dark, but I was struggling to keep up. Alex hung back and stayed within view, occasionally turning to check on me and wait for me to catch up.

Eventually I gave up stomping out of sheer exhaustion and dropped the pack off my left shoulder, letting my right shoulder carry the full weight of the pack. It was so good to hear Kate let out a whoop of joy at finding the right river crossing. It gave me the strength to keep going and eventually we found a camp not far from the river, on a high bank. We restocked our water canisters, being careful to approach the river with eyes wide open for crocs. Then we set up our beds and got a campfire started.

“Did you end up using the tampons I gave you?”, asked Alex. “You could put the used ones on the fire if you like.” We were being very careful with our waste, making sure we left as little evidence of our visit as possible, in honour of nature. Knowing I was going to have my period on this journey, I had done a lot of research and decided to use a moon-cup. A moon cup is a tiny rubber cup you insert into your vagina. The lip creates a suction seal and the cup catches the menstrual blood. You pull the cup out by its stem. I had borrowed some tampons from Alex before we left, just in case I had trouble with the moon cup because this was my first time using it. But so far so good!

Another purchase I had made in the lead up to our journey was a dehydrator. I used it to dry the food I had prepared for the journey and then gave it to the girls so they could do the same. It’s such a great way to manage food when you are hiking, because it saves space, reduces pack weight and keeps food from spoiling. That night we had a delicious rehydrated dahl. After dinner, Kate and I watched in astonishment as Alex pulled a couple of avocados from her pack. She cut them in half, removed the seeds and scooped the flesh out into a bowl. She mashed the avocado, mixed in some cacao powder and added some maple syrup. I was most impressed when she then used the avocado shells as bowls and served us up some exotic avocado chocolate mousse! Watching the girls unpack many such strange delights from their packs, I had to ask “How heavy are your packs!?” Mine was probably 12 kilos at it’s heaviest, when all stocked up with water and food, so I was astonished to hear them estimate about 16 kilos each.

There were some shared items like a cooker and rope that we were meant to take turns carrying but they never did ask me to do this, for which I am deeply grateful. Why did we need a rope? “Just in case” Alex had said, during one of our planning meetings. “We might need it to get down the waterfall.”

I was exhausted and crawled into bed straight after dinner, leaving the girls to chat together by the fireside while I carefully reached under my bedroll to remove another rock.